Current methods for the treatment of breast cancer fail to target cancer metastasis, and as a result of this, metastatic cancer survival rates significantly drop. Hence, there is an urgent need for a new method of treatment, which target cancer metastasis. The epithelial-mesenchymal transition (EMT) has been linked to a higher rate of metastatic potential due to the production of more invasiveness and chemoresistant cells, termed cancer stem cells. EMT is a process in which epithelial cells transition into mesenchymal cells increasing their invasive properties. A suitable candidate for targeting EMT is the transcription factor FOXC2. FOXC2 has been linked to the induction of EMT, as well as being correlated with low overall and event free survival in several cancer lines. A small molecule inhibitor of FOXC2 can prove not only to be crucial in inhibiting EMT through the development of a new cancer therapeutic drug but also to better understand the cellular process of cancer metastasis. 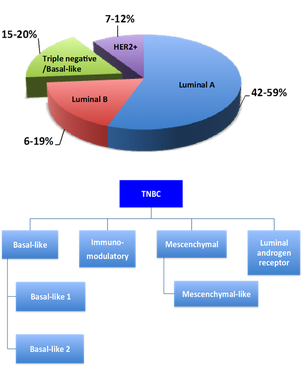 The triple-negative breast cancer (TNBC), which lacks detectable expressions of the estrogen receptor (ER), the progesterone receptor (PR), and the human epidermal growth factor receptor 2 (HER2), represents about 15% to 20% of all breast cancers. Due to its molecular and genetic profiling, TNBC is more aggressive and invasive, with higher metastatic potential, than other subtypes of breast cancer. Although combination of surgical excision of tumor with neoadjuvant or adjuvant chemotherapies have shown success in reduction of breast tumors, higher rate of early recurrence and distant metastasis to brain and lungs result in worse post-treatment survival rate of TNBC patients. TNBC reflects a substantial clinical challenge due to the poor responses to endocrine therapy or other currently available targeted therapeutic agents. Some previously marketed drugs have been withdrawn from the approval list for breast cancer treatment recently, due to insufficient data support on efficacy and most importantly increased reports on cytotoxicity. At present, there is no any particular single agent shows clear evidence on effective cure against TNBC. The heterogeneous nature of the disease and the existence of the six further-divided subsets of cell populations make TNBC a tough clinical challenge. Thus, identifying suitable biomarkers, or discovering new targeted therapeutic options for TNBC is of pressing need.
In this study, I aim to use a “one-bead one-compound” (OBOC) combinatorial chemical library to screen for small synthetic molecules that bind specifically to TNBC cells, which have the potential to be developed into TNBC-specific anti-cancer ligands. Identification of specific and selective ligands targeting TNBC tumors provides opportunity to develop new anti-TNBC drugs, as well as TNBC-specific in vivo probes or drug carriers. With such expected discoveries, tailored and targeted therapies for TNBC patients could be achieved, while magnitude of side effects introduced by the existing chemotherapies could be maximally reduced. 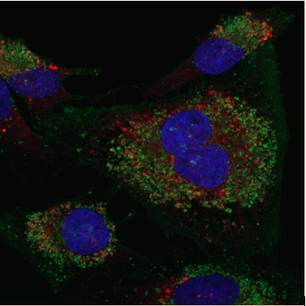 http://www.thermofisher.com/us/en/home/technical-resources/research-tools/image-gallery/image-gallery-detail.19734.html
Development of Autophagy-Inducing Small Molecules for Treatment of Cancer

Current chemotherapy drugs have been found to be ineffective to some cancer because some cancer cells are resistant to undergoing a self-activated form of cell death called apoptosis. Several studies have confirmed that this may be due to DNA mutation in essential apoptosis genes, overexpression of anti-apoptotic genes, or silencing of pro-apoptotic genes. The capability of these cancer cells to evolve and adopt intrinsic survival strategies is an obstacle that current researchers face when developing cancer-killing drugs that rely on apoptotic pathways. Therefore, another mode of action to kill these apoptosis-defective cells is highly desirable. Cell death by excess autophagy has gained a considerable amount of attention as an alternate therapeutic strategy. The objective of this study is to develop and evaluate small molecules for autophagic cell death activity in cancer cells, particularly in those that are apoptosis-defective. 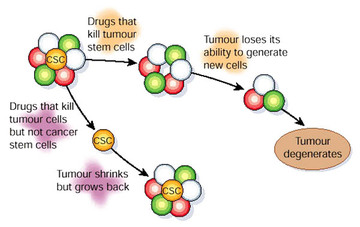 Increasing evidence has shown that the subpopulation of cells within tumor, cancer stem cells (CSCs), lead to the difficulty in cancer treatment. CSCs have tumorigenicity, high proliferative activity, and the ability to self-renew and differentiate. These properties give rise to the recurrence or metastasis of cancer. Through the identification of CSCs-selective ligands, we will be able to efficiently target CSCs that conventional therapies fail to eradicate.

Paul E. Goss and Ann F. Chambers "Does tumor dormancy offer a therapeutic target" Nature Review 10 (12), 871-877 (2010).
Imaging Dormant Tumor Cells
​
Breast cancer cells frequently spread to other distant organs in the body, such as the bone marrow and lungs. These cancer cells have been shown to disseminated from the primary tumor at an early stage of disease progression even for a patient who is considered in remission. The disseminated tumor cells that reside growth-arrested for long periods of time in a patient until they suddenly become proliferative and metastatic, are termed dormant tumor cells. Currently, there is no methods that allow in vivo imaging of the dormant tumor cells. Discovering novel dormant tumor cell-targeting in vivo imaging agents can lead to 1) understanding mechanism that regulates tumor dormancy or the conditions that awaken dormant tumor cells, 2) developing novel targets and interventions to prevent disease recurrence and 3) early diagnosis or prediction of cancer metastasis.